Check out my spiffy G+ profile under this long-established handle, en_ki. (Sorry, you can't, it's blocked. But rumor has it that this post will lead to it being unblocked.)

I did my fortnightly drop-in to LinkedIn, and had a connection request from an obvious spammer. Their profile information was generic, job descriptions copy/pasted from random places, the job title they claimed to have was not one used at the employer we supposedly had in common, their career trajectory did not make much sense, and their photo was a stock photo of a pretty girl. So I reported them.

Something I noticed before I reported them was that at least 10 of my LI connections had fallen for it.

They do not give you points for Sitting On A Fire-Ant Hill After Your Run. I'm pretty sure that burned some calories. 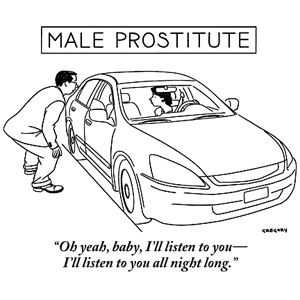 a rare example of a New Yorker cartoon where the caption should not be replaced with "Christ, what an asshole!"? If not,

Open to: All, detailed results viewable to: All. Participants: 6

...should be said by

Yes, any random web site can completely take over your computer, steal your lunch and piss on your rug unless you update.

Yes, even if you have a Mac.

Yes, even if you have Linux.

Yes, even your phone. Yes your tablet. Yes your smart watch. Yes your goddamn car, your insulin pump, or whatever other thing some idiot decided needs to work with the post-Mosaic pre-HTML5 Web.

No, this is not the same security hole from last month or whatever: this is another one.

Yes, you should just uninstall Flash, even if it breaks YouTube and shit. But you're not going to, are you? So go update that shit again and set it to auto-update.

1. I have heard approximately 200,000 things about The Hunger Games, some random SF thriller, by people in my social network. (The things I hear are the same things over and over again: apparently it is about a girl who is admirable because things happen to her, and some people in the movie are not white, and there are a lot of racist people on Twitter.)

There remains about a 10% chance I will see it before it leaves theaters, because it is the only movie I have heard is playing but I don't actually think completely passive characters are fun to watch.

2. I had, until today, heard exactly zero things approximately one thing about The Cabin In The Woods. This is by Joss Whedon, which means the chance that I will go and see it given that I have heard about it is 100%. It has been out for almost two weeks.

Dear Hollywood marketing machine: the whole damn point of marketing is that that you identify the kind of people who will buy your shit and make them aware that your shit is there and stinks so good. When you have shit I want and, instead of telling me about it, you push some completely different shit as hard as you can in the hopes of making me want it, you have completely failed at your job. I hate you.

For the record, the reason I know about tCitW is that

digitalsidhe mentioned DNA Pizza, and I realized I hadn't checked DNA Lounge's schedule in a while (in case there was a show this weekend that would motivate me to finally go there after all these years of reading the proprietor's web site/LJ on and off), so I went to check it out, and I took a look at the proprietor's blog in case there was anything interesting that BoingBoing hadn't reblogged, and lo! he said that movie was good. And also he thinks hipsters are better than regular people.

And now I know that. This is what social networking is for.

Yet Enki risked the anger of Enlil and the other gods in order to save humanity from the Deluge designed by the gods to kill them. In the Legend of Atrahasis—later adapted into a section of the Epic of Gilgamesh—Enlil sets out to eliminate humanity, whose overpopulation and resultant mating noise is offensive to his ears. He successively sends drought, famine, and plague to do away with humankind. However, Enki thwarts his half-brother's plans by teaching Atrahasis the secrets of irrigation, granaries, and medicine. The enraged Enlil convenes a council of the gods and convinces them to promise not to tell humankind that he plans their total annihilation. Enki does not tell Atrahasis directly, but speaks of Enlil's plan to the walls of Atrahasis' reed hut, which, of course, the man overhears. He thus covertly rescues Atrahasis (Utnapishtim in the Epic of Gilgamesh) by either instructing him to build a boat for his family and animals, or by bringing him into the heavens in a magic ship.

Enlil is angry that his will has been thwarted yet again, and Enki is named as the culprit. Enki argues that Enlil is unfair to punish the guiltless Atrahasis for the sins of his fellows and secures a promise that the gods will not eliminate humankind if they practice birth control and live in harmony with the natural world.
—New World Encyclopedia > Enki > Savior of humankind

siderea asked a few months back how to keep track of separate bookmark collections for work and personal web browsing.

I now have this problem solved to my complete satisfaction with Chrome sync + multiple users.

On both my work and personal computers, I have two users in Chrome: Work (synced with my work account) and Personal (synced with my personal account), with a different icon in the upper right so I can tell which one I'm in. If I encounter something in one browser that I'd prefer to access in the other, I dump it into the bookmark bar---usually actually a specific queue folder.

"You'd never tolerate somebody talking about me--or any of your friends--the way you talk about yourself."

It also helped to realize that it wasn't reasonable for the cat to get "Oh, what a great cat! Look at those ears and whiskers! And you haven't caused an international monetary crisis! What a great cat!" while I'm getting "You stupid piece of shit!"

For those who are the type to read it, but haven't read it yet: if you liked Cryptonomicon, you'll like REAMDE. Stephenson is back to writing what I used to think of as The Stephenson Novel (version n), but he's matured a bit, as you'd figure after like 10 years. I liked it, but would be happy to give my hardcover to the next person who wants it.

No historical subplot. Still somewhat military-fetish: lots of guns, and we damn well better know their model numbers. Guns are, however, not magic wands: several times it's a plot point that guns need to be handled correctly, and characters who practice a lot and know their limitations do better than characters who don't. I was reminded specifically of Clarice Starling in Silence of The Lambs (the book; I don't recall the movie emphasizing as strongly that she had her shit together gun-wise).

Neal tried hard not to come off as writing a Guy Patriarchy Book:

though he still pairs characters off heterosexually, and it still rather works as a Guy Book.

If you're never heard of Neal Stephenson: characters are exaggerated to a somewhat comic-booky degree; heroes Mary Sue-y; Chekov keeps leaving his guns all over the place; the occasional absurd coincidence is supplied where needed to advance the plot. Fun nevertheless if you like thrillers, are reasonably in touch with modern society, and laugh at many of the same sort of jokes I do.
Collapse